What is Arteriovenous Malformation?

Arteriovenous Malformation (AVM) relates to an anomaly whereby the arterial flow bypasses the capillary circulation and connects directly to the venous drainage circulation, thus not allowing for appropriate tissue perfusion.

AVM is characterized by low resistance to blood flow due to direct communication between the arteries and veins, which bypasses the micro-circulation with vasomotor capabilities. Thus, blood flow through an AVM anomaly is a high volume flow, hyper-perfusion, which in turn results in relatively high mean blood flow velocities.

How to use TCD for the Arteriovenous Malformation

High cerebral blood flow velocities during vasospasm or stenosis are primarily due to a decrease in the arterial cross-sectional area. Contrary to that, the high velocities due to an Arteriovenous Malformation are a function of a hyperemic flow.

Therefore, the increase in velocity is usually lower than that seen during severe vasospasm. In addition, because of the very low resistance to flow (which bypasses the arteriolar and capillary high resistance bed), the blood flow is significantly less pulsatile, as evident by a generally lower pulsatility index (PI).

In addition, for AVMs involving the MCA, the Lindegaard ratio, defined as the ratio of mean Middle Cerebral Artery (MCA) velocity to the extracranial Internal Carotid Artery (ICA), is lower than that seen during vasospasm. Likewise, for AVMs involving the ACA (Anterior Cerebral artery), the Sloan Ratio (Ratio of ACA to ICA velocity) is expected to be lower, and for AVMs in the posterior circulation, the Soustiel Ratio (Vertebral to Basilar velocity ratio) may be lower. 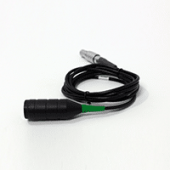 The Dolphin TCD is designed for a detailed evaluation of blood flow velocities in the Circle of Willis and the complete cerebral circulation. All velocity and pulsatility parameters are readily presented to determine abnormal values quickly. Also, the Lindegaard Ratio, as well as the Sloan and Soustiel ratios, are automatically calculated and displayed for immediate and improved diagnosis of AVM.

The Multi-depth feature of the Dolphin provides quick and simultaneous scanning of the Doppler spectrums along an arterial line and identifying whether the increase in velocity is focal or along the arterial region. An interactive Summary Screen clearly displays the measurements from the posterior and anterior cerebral regions, as well as from the extracranial ICAs.

The spectral Doppler examination for each site is supported by an advanced Phasic M-Mode and/or Power M-Mode, which helps to identify the blood vessel of interest quickly. In addition, 3 different pulsatility parameters are available for diagnosis:

Among the different Doppler controls, the control of the Sample Volume size is particularly important since it defines the region of interest from which the Doppler spectrum is captured for optimal assessment.

AVM is characterized by a relatively high blood flow velocity, which is accompanied by a low pulsatility index, and a relatively normal or low Lindegaard, Sloan, or Soustiel ratios. A PI of less than 0.5 may indicate an AVM.

The content of Viasonix Ltd. website is for information only, not advice or guarantee of outcome. Information is gathered and shared from reputable sources; however, Viasonix Ltd. Management is not responsible for errors or omissions in reporting or explanation. No individuals, including those under our active care, should use the information, resources or tools contained within this self-diagnosis or self-treat any health-related condition. Viasonix Ltd. Management gives no assurance or warranty regarding the accuracy, timeliness or applicability or the content.